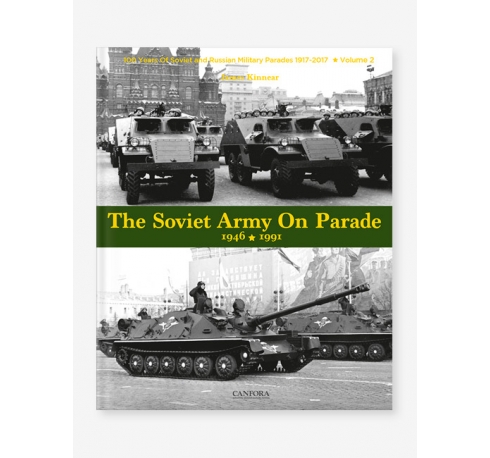 A display of Cold War power

Undoubtedly our most ambitious project to date, this second volume in a three volume series describes the tanks, armoured vehicles, artillery and rocket systems paraded by the Soviet Army on Red Square from 1946 until the last Soviet era parade in November 1990. From the massed tank displays of the immediate post-war parades, to the introduction of strategic rocket systems during the “Khrushchev” years, all the weapons displayed on Red Square during the Cold War are described in detail.

The background military history of the Soviet Union during the Cold War years and the philosophy involved in the weapon developments is also related, building the overall picture of Soviet parades as a projection of Soviet military might.

– For 100 years since the Russian Revolution in 1917, the Soviet Union and now the Russian Federation has demonstrated its latest military tanks and military vehicles on Red Square for Russian domestic and foreign consumption.

– The annual May and November military parades were in 1946 joined by a “Tankman’s Day” parade, celebrating the day Red Army forces crossed into Axis territory in 1944.

– Soviet tanks such as the T-54 had their public Red Square debut almost a decade after they entered service, while some rocket systems constantly displayed never entered service.

– One of the best parade watching locations in Moscow was the former US Embassy building, past which the parades moved onto Red Square, while the British Embassy overlooked the return journey from Red Square.

– The start of the 1960 parade was delayed while Khrushchev decided whether or not to order the shooting down of an American U-2A USAF/CIA reconnaissance aircraft flying over Siberia.