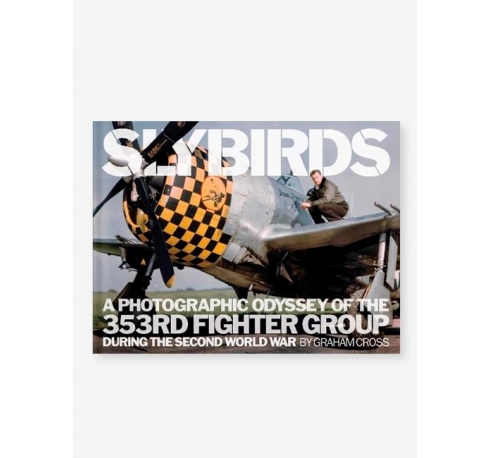 A photographic Odyssey of the 353rd Fighter Group during the WWII

The most in-depth photographic record of the 353rd Fighter Group to date.
Extremely valuable resource for aviation modellers.
Written by one of the leading 8th Air Force historians

The distinctive black and yellow chequered markings of the 353rd Fighter Group, the ‘Slybirds’, made them one of the USAAF ‘Mighty’ 8th Air Force’s most colourful fighter groups. Flying P-47D Thunderbolts and later P-51D Mustangs the 353rd’s appearance in the skies over occupied Europe witnessed growing American air power and helped to change the course of the air war. From mid-1943 until the end of hostilities in Europe, the 353rd participated in all major aerial battles from the 1943 Regensburg and Schweinfurt raids to ‘Big Week’, the attacks on Berlin, and the support of the D-Day landings and Normandy campaign in 1944. They went on to win the Distinguished Unit Citation during the Arnhem operation of September 1944 and after converting to P-51 Mustangs they continued to play a full and prominent role in the final smashing of the Third Reich from the air.

Fighting High Publishing has come together with respected 8th Air Force historian Graham Cross to tell the story of the ‘Slybirds’. With access to an unparalleled photographic archive built up over nearly thirty years of close association and friendship with the group, the author provides a detailed representation of all aspects of the group’s key activities. Focussing not just on the aircraft and pilots but also the vital work of the ground crews and service personnel, this is a stunning tribute that fills a major gap in the history of 8th Fighter Command. A full honour roll to those who made the ultimate sacrifice is included along with details of all POWs and all confirmed claims by the Group’s air-to-air aces.

Packed with nearly 450 photos, the majority of which are previously unpublished, unseen wartime colour photos and detailed captions, this book is a visual and information feast. This latest volume in Fighting High Publishing’s ‘Odyssey’ series is the most in-depth photographic record of the 353rd to date and provides a unique window on a fighter group at war.