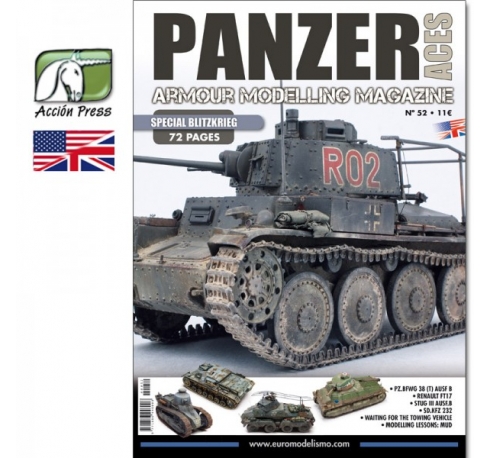 This product is no longer in stock

2.- PANZERBEFEHLSWAGEN Pz.BfwG 38 (t) Ausf B
This small Czech AFV which eventually became rather useful for the German Army, was one of the great stars of the Blitzkrieg. We are showing a seldom seen version; the command version identifiable by its large radio antenna found on the rear of the vehicle. This is an excellent Tristar kit with an excellent contrast work between the dirt and the dry mud and its dark Panzer Gray livery.
14.- RenaulT FT17
One of the consequences of the Blitzkrieg was the capture of a considerable amount of enemy war material. Abilio gives us an example of this with his German FT-17. This kit has a subtle paintjob, especially with the dirt work on this vehicle.
24.- Stug III Ausf.B
Another feature of the “lightning war” was the common use of self-propelled artillery for infantry backup, a job that was entrusted to the specially designed Stugs that played an important part towards the beginning of operation Barbarossa, when very large expanses of land were conquered in a very short time. Carlos’ Stug with its peculiar brown spot camouflage on the roof of its casemate is a perfect example. This kit also features outstanding dirt and dry mud work.
32.- Sd.Kfz 232
We can’t talk about the Blitzkrieg without mentioning the scout vehicles. The work which traditionally was entrusted to Germany’s cavalry was given to these armored vehicles on wheels that were present throughout the conflict in varied forms. Ivan deploys a wide range of techniques on his 232 including the new “Black and White” painting technique to recreate the vehicle’s Panzer Gray. We will also like to mention his elaborate dirt application work.
44.- Waiting for the towing vehicle, france 1940
Not everything was gray during the Blitzkrieg. Color was provided by the French AFV’s and their flashy schemes. Jorge shows us in a very instructive way how to use these camouflage patterns, integrating the vehicle in a natural environment, putting the vehicle in context and hiding it at the same time. A very interesting article of a vignette which is full of light, color, plant life, minutiae, human elements, animals, etc. with an impeccable presentation and some wonderful pictures.
64.-Modelling lessons: mud
This time we’ve been doing some tests for recreating easily mud and doing mud splashes. We also show what are the market choices and the different products available in order to create a springboard for your own work.