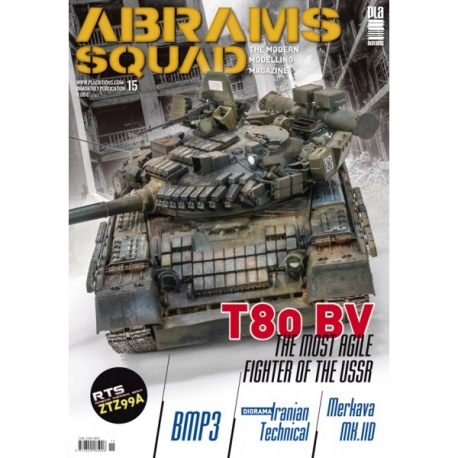 10 – Remote Thermal Sight:  We haven’t built any People’s Liberation Army AFV in fourteen issues, but to celebrate our fifteen publication we decided to make the new Panda’s reproduction of ZTZ99A, the most modern and advanced Chinese main battle tank. The model is really attractive and interesting and we are sure that the good job done by Cesar Gonzalez will inspire a large number of modellers.

20 – The most agile fighter of USSR: T80BV:  There is no better way to open the magazine than a Russian Main Battle Tank, and better when it’s painted by one of the best modellers in the world, Chris Jerret. Our Canadian friend has worked especially in the painting and the chipping effects with using the hairspray technique. For certain this is one of those articles that our readers will save in their memories.

32 – Iranian Toyota: The Persian Predator:  Vignettes are always attractive and welcomed in Abrams Squad, specially if they are based around unusual vehicles, transformations and the skill Imad Bouantoun applies in all of his works.

42 – Eagle IV: Short illustrated report of the 4x4 Mowag’s car when it was tested in Spain by the Marines unit. The Eagle IV is currently in service with the army’s of Germany and Denmark and was employed in Afghanistan.

46 –  Merkava Mk.IID: Chariots of Fire from Israel: Vlad Adamec gets up his old tricks with an IDF vehicle. All Merkavas may seem equal to the untrained eye, but this latest version from Academy has a special appeal and many modellers have already got one in their collections. Vlad explains how he finished his Mk.IID so masterfully.

54 - BMP-3 MICV: A transport with the soul of a warrior: It’s odd, but we haven’t published any BMP-3s in Abrams Squad. Saying that, all Russian armoured transport vehicles are really popular modelling subjects. Thomas Birzer shows us with a wonderful build and informative explanations exactly how he built and painted this model. An inspiring article!

66 - Gepard: History of the last German Flakpanzer: Once again, the plastic scale model producers make a vehicle trendy, in this case the already retired AA Gepard. Patrick Winnepenninckx affords us some fantastic contents that will help us soon when the upcoming magnificent Models of Meng, Takom and Trumpeter will land on the market soon.